House of Glass (Jay) "So if I am able to preserve this writing of mine…I would like you to give it the title 'House of Glass.'"

For the last time in 105 years, Venus crossed between the Earth and the Sun.  Two RPCVs who are employed by NASA sent each Peace Corps post (or at least the PC Indonesia post) a packet of information about astsronomy and Venus’s tiny eclipse.  The real prize of the packet was three eclipse glasses—cheap paper shades with polarized plastic lenses that allow you to stare directly at the sun.  Who isn’t attracted to a strange white guy wearing funny sun glasses staring up at the sky in front of a white board in the middle of a school basketball court?  Not my students.

END_OF_DOCUMENT_TOKEN_TO_BE_REPLACED

Paman Sam with my next door neighbor at a late-night wayang performance. Nobody knows what happened to Sam after this photo.

Someday I’ll actually get to writing about real wayang (including the two performances I participated in), but today, I’m only going to write about the wayang kertas assignment I gave to my Seni Budaya students at the end of the semester. Kertas means paper–the assignment was to draw any wayang character the student wanted on a piece of construction paper, decorate it, attach movable arms, and fashion on bamboo sticks in the manner of real wayang puppets. I encouraged my students to think outside the box and expand the concepts for their characters beyond the traditional shapes. After hearing suggestions like wayang Michael Jackson and wayang Spongebob from my classes, I was hoping I would get modern additions to the traditional wayang line-up. I took the classic image of Uncle Sam and turned him into a wayang Paman Sam as an example for the students (Paman Sam was unfortunately left behind when I took him to a wayang performance near my village; I think he ended up in the trunk with real leather characters).

END_OF_DOCUMENT_TOKEN_TO_BE_REPLACED 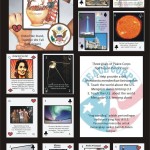 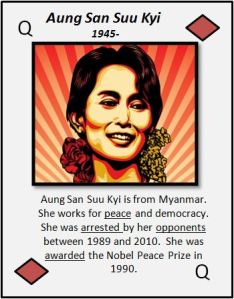 My counterpart and I created our own deck of cards with information about the world written in both English and bahasa Indonesia. We use the deck as a means of selecting students to participate in class as well as an interesting piece of media to keep the students engaged.

Each suit of the 52-card poker deck is characterized by a specific topic. Hearts are “U.S. Culture,” Diamonds are “Influential World Women,” Clubs are “Important Places in the World,” and Spades are “Globalization.” Each of the four aces sticks to the suit’s theme but compares something relevant in Indonesia to something relevant in the United States.

You can download the Microsoft PowerPoint file I used to make and print the cards here [MAN poker cards, powerpoint file]. The list of all 52 subjects on my deck is listed at the very end of this post. If you want to make your own deck, feel free to change some of cards to fit your own desires.

To whom it may concern, it cost me about Rp 17.000 to get a good laminating job on these cards. My school offered to pay for it.

END_OF_DOCUMENT_TOKEN_TO_BE_REPLACED

My name is Jay Wellik, and I am a Peace Corps Masters International student studying volcanic hazards at Michigan Technological University.

In the fourth book of Pramoedya's Buru Quartet, the narrator refers to a 'House of Glass' as a metaphorical place where he can transparently record his thoughts and observations for posterity.

This will be my House of Glass for my 27 months as a Peace Corps Volunteer in Banyuwangi, East Java, Indonesia.